Jericho is a city studied by both historians and Bible scholars. It has been one of the longest in existence countries in the world. It is north of the Dead Sea and west of the Jordan River. The walls of Jericho have been sought after because of the Biblical story surrounding it. I am referring to when the Israelites overcame Jericho in Canaan’s invasion. Joshua is known to be the servant who became leader. It was said that he was buried in a place called Har gaash which is inside a volcano. While the walls of Jericho have been found, remains of the Bible character Joshua remain undiscovered. Ruins of the city are believed to be part of the archaeological city, Tel es-Sultan, which is situated north of the Dead Sea and today is at the West of Palestine.

Archaeological work was done in the 1950s by people like Kathleen Kennedy who discovered walls and artifacts proving that the city was attacked. Before Kathleen Kennedy’s discovery, Jon Garstang from the 1930’s found artifacts and said that he believes the walls fell, “apparently by earthquake”. (“Jericho and the Biblical Story,” Wonders of the Past, Wise, New York, 1937, p. 1222). This had shown proof of the wall of Jericho being torn down and great importance of proof of the actual event to Biblical scholars. Further proof of the incident includes Ernst Sellin and Carl Watzinger discovering three quarters of the base of the wall.

The earliest signs of civilization showed 12,000 years ago as hunter gatherers resided there. It is assumed that they were prosperous in that they were known to have a sedentary lifestyle. There homes were stone structures that were partially underground. During the time of 8,500 BC, Jericho had become a more archaeological and had become a Neolithic Settlement involved in trade. It was during this time the tower of Jericho was built. The tower of Jericho was originally found by Dame Kathleen Kennedy who believed that the tower may have been part of what fortified the town. The city was also considered to be a military stronghold. When God made the command and Joshua followed through by leading the people, he was addressing a stronghold that existed within the land.

The Bible tells that Jericho was surrounded by impenetrable walls (Joshua 6). God told the people of Israel to march 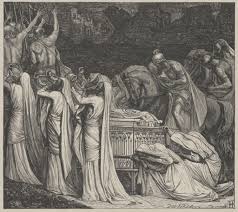 around the city of Jericho once with the armed men for six days. They were to have seven priests carry trumpets in front of the ark. On the seventh day, they were to march around the city seven times as the priests blew the trumpets during the march. At the time of the blowing of the trumpets, the people were to shout. Once this was completed, the army would go and take the city. According to the story, the walls fell, and the people took over the city.

This wall was attacked within the period of 1550 BC and 1400 BC. It is said that the attack occurred toward the end of The Bronze Period which is consistent with the story in the Bible. Jericho was on top of a hill and the wall was made of mudbrick. During those times, a wall of this nature would be a formidable wall to overtake. The evidence from archeology digs proves that the city existed, and it was overtaken. This city was heavily protected with provisions of food and water lasting months. It would take many months, even years to take over the city. It took the Israelites seven days. It was a miracle and something unheard of to be done in a short period of time.